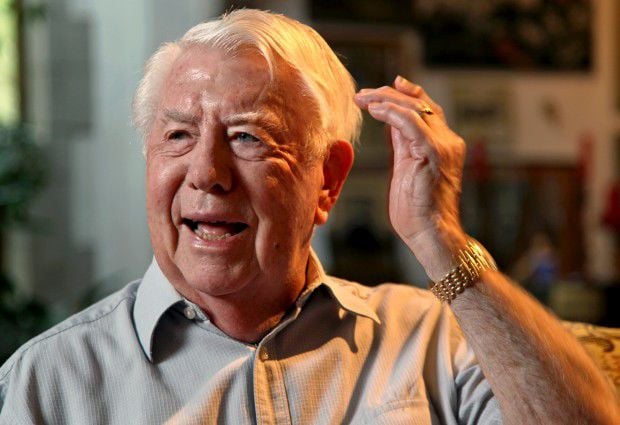 Mort Walker, whose “Beetle Bailey” comic strip followed the exploits of a lazy G.I. and his inept cohorts at the dysfunctional Camp Swampy, and whose dedication to his art form led him to found the first museum devoted to the history of cartooning, died Saturday (Jan. 27, 2018) at his home in Stamford, Conn. He was 94.

Bill Morrison, president of the National Cartoonists Society, confirmed the death. The cause was pneumonia.

In contrast with the work-shirking soldier he immortalized, Mr. Walker was a man of drive and ambition. He drew his daily comic strip for 68 years, longer than any other U.S. artist in the history of the medium.

Debuting in 1950, “Beetle Bailey” was distributed by King Features Syndicate and eventually reached 200 million readers in 1,800 newspapers in more than 50 countries. Beetle and company appeared in comic books, television cartoons, games and toys and were also featured in a musical with the book by Mr. Walker, as well as on a U.S. Postal Service stamp in 2010.

“Beetle Bailey” was among the first cartoons to shift from the serial strips of the previous decade to the graphically simpler gag-a-day model that predominates today.

Beetle’s cast includes the title character, a lanky goof-off whose eyes are always covered by the visor of his hat or helmet; his rotund nemesis, Sgt. Snorkel, a violent but sentimental man who frequently beat Beetle to a pulp of squiggly lines; the ineffectual Gen. Halftrack, who ran Camp Swampy (a place the Pentagon had lost track of); Halftrack’s voluptuous secretary, Miss Buxley; Cookie, the hairy-shouldered chef and purveyor of inedible meatballs; and the bumpkin Pvt. Zero.

The characters never saw battle, and weapons and uniforms were not updated. Mr. Walker said that the military setting was simply a convenient stand-in for the pecking order of which everyone is a part.

Comics historian R.C. Harvey wrote that the strip “gives expression to our resentment by ridiculing traditional authority figures and by demonstrating, with Beetle, how to survive through the diligent application of sheer lethargy and studied indifference.”

Starting in 1954, Mr. Walker wrote another hit cartoon, “Hi and Lois.” Mr. Walker said he wanted to depict a loving family “together against the world … instead of against each other.”

He thrived on collaboration, working with assistants (including Jerry Dumas and Bill Janocha, and his sons Brian and Greg) to review jokes every week and to create at least eight other strips, among them “Boner’s Ark” and “Sam’s Strip.”

Brian and Greg, who have written “Hi and Lois” since the 1980s and have assisted Mr. Walker with Beetle gags and inking since the 1970s, will continue to produce “Beetle Bailey.”

Even as he was devising his gags — he claimed to have 80,000 unused jokes in storage — Mr. Walker devoted himself to establishing a museum that would treat the comic strip as a serious art form.

In 1974, with a check from the Hearst Foundation and refurbishing help from family and friends, he opened the Museum of Cartoon Art in Greenwich, Conn. The collection grew with donations of art from newspaper syndicates and the estates of cartoonists and is today worth an estimated $20 million.

The museum relocated several times and closed in 2002 as the International Museum of Cartoon Art in Boca Raton, Florida, after corporate donors declared bankruptcy. In 2008, it became part of Ohio State University’s Billy Ireland Cartoon Library and Museum, where a gallery is named after Mr. Walker.

He delighted in the history and tricks of his trade and wrote a tongue-in-cheek textbook, “The Lexicon of Comicana” (1980), in which he described commonly used cartooning conventions.

Grawlix were the symbols deployed to convey foul language; briffits were the clouds often found at the end of hites (horizontal lines indicating speed). To Mr. Walker’s amusement, his book sometimes appeared in the art instruction section of bookstores, and his neologisms would pop up in discussions about the art of cartooning.

Addison Morton Walker was born Sept. 3, 1923, in El Dorado, Kansas, the third of four siblings. His father, Robin Walker, was an architect who moved the family from oil boom to oil boom, building houses, churches and schools.

But he never got rich, and after stints in Texas and Oklahoma, the family settled in Kansas City, Missouri. Robin Walker wrote poetry, and his work appeared in the Kansas City Star with drawings by Mr. Walker’s mother, Carolyn, a staff illustrator for the newspaper.

Mr. Walker said he knew he wanted to be a cartoonist at the age of 3. As a child, he accompanied his parents to the newspaper and became friendly with the staff cartoonists. By 12, he was regularly publishing his own cartoons in magazines such as Inside Detective and Flying Aces, and at 15, he had a comic strip in the Kansas City Star.

At 18, Mr. Walker told an interviewer at Hall Brothers (later Hallmark Cards) that he thought their cards were lousy. He was hired and became chief editorial designer. He was instrumental in changing the company’s cards from cuddly bears to gag cartoons more suitable for soldiers serving overseas.

Mr. Walker spent a year at Washington University; in 1942, he was drafted. “Little did I know,” he wrote decades later in the pictorial memoir “Mort Walker’s Private Scrapbook,” “that I was going to get almost four years of free research.”

He eventually found himself in charge of 10,000 German prisoners in a POW camp in Italy. At the end of the war, he helped oversee the destruction of binoculars and watches from an ordnance depot in Naples. His job was to make sure nobody stole anything before it was destroyed. “I began to realize,” he wrote in the memoir, “that army humor writes itself.”

After his discharge, Mr. Walker enrolled at the University of Missouri, where today a bronze statue of Beetle lounges on a bench. It was at Mizzou that Mr. Walker developed his lanky prototypical slacker.

After Mr. Walker graduated, he moved to New York to become a cartoonist. Undaunted by rejections, he pinned a note to his drawing board reading, “I will not be denied.”

Within two years, he was a top-selling gag cartoonist in publications such as the Saturday Evening Post. Some of those panels featured a college student with a hat over his eyes. He was named Spider, after one of Mr. Walker’s fraternity buddies who had drunkenly crawled across the lawn to get to the house one night.

The artist re-christened him Beetle and put him in a strip about college life; he chose the surname Bailey after a supportive cartoon editor at the Saturday Evening Post.

“Beetle Bailey” debuted in 12 papers and was almost canceled by King Features. As the Korean War began and young Americans faced the draft, Mr. Walker had Beetle enlist in the Army, and the strip gained traction. In 1953, the National Cartoonists Society named Mr. Walker cartoonist of the year.

But it wasn’t until the next year, when the Pacific edition of the U.S. military newspaper Stars and Stripes banned “Beetle Bailey” for mocking the authority of officers and encouraging laziness in the ranks, that Beetle’s success was assured. The ban lasted 10 years, and the publicity dramatically boosted syndication.

Mr. Walker, who became president of the National Cartoonists Society, won its Golden T-Square award for 50 years of service to the industry in 1999.

In 1949, Mr. Walker married the former Jean Suffill, with whom he had seven children. The marriage ended in divorce. In 1985, he married Catherine Carty. Besides his wife, survivors include his children and three stepchildren. A complete list of survivors was not immediately available.

In the late 1960s, mainstream comic strips including “Peanuts” began making efforts to include black characters. In 1970, against the advice of his syndicate, Mr. Walker integrated his army, adding Lt. Flap, an African-American officer with an Afro and a goatee.

Flap’s opening line: “How come there’s no blacks in this honkie outfit?!”

“Stars and Stripes” banned his strip again, for fear that the character would stir up racial tensions. Again syndication soared.

In 1997, responding to criticism from feminists who objected to Halftrack’s longtime ogling of Miss Buxley, Mr. Walker had the elderly general attend sensitivity training. Gone were gags such as the one in which Halftrack approves of the three-martini lunch that enables him to see double Miss Buxleys.

He introduced Beetle in 1950 as a lazy college student, with many characters based on Mr. Walker’s Mizzou friends. In 1951, Beetle stumbled into an Army recruiting post and enlisted in the Army, where he has remained a private for 67 years.

In 1990, the Pentagon honored Mr. Walker with the Certificate of Appreciation for Patriotic Civilian Service. “As hard as it is to find anything at the Pentagon,” the veteran gagman quipped, “they finally found a sense of humor.”